Waiting for my hat to come 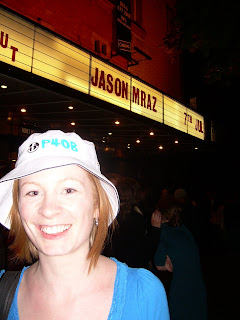 American singer-songwriter Jason Mraz is so fond of hats that he's actually created a t-shirt which says "Fond of Hats". I wonder if he saw Nathalie's when she smuggled it into his recent concert at the Shepherd's Bush Empire, west London?

"This number goes out to all the fans of P40B around the world. You mean everything to me. I love you all! Hey, Phil, have a great birthday in November, dude!"

That's the kind of thing that Jason might have said on stage. On the other hand, he might not.

Hathalie, as she's now known, tells me that this musical titfer has already arrived in Thailand. Perhaps it will be worn at a gig in Bangkok?