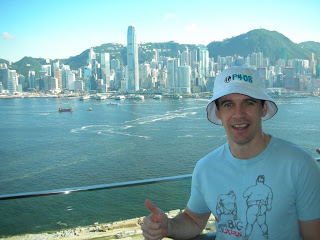 Flight of fancy: Aussie pilot Brady gives a thumbs up for the first hat to go officially 'wild'. Click to enlarge.

Every titfer secretly hopes to become a star. The truth, however (with apologies to the Bard) is that some hats are born great, some achieve greatness and some have greatness thrust upon 'em.

Number 23 has many claims to fame. It's currently the piece of branded headgear to have changed hands the most times. It was the first hat to send a picture of itself from a non-European location. And now it's calling up Norris McWhirter once again with the first genuinely 'wild' shot.

For new readers, I better clarify what I mean by wild. Put simply, it's a status applied to hats that are in the hands of people the original recipient doesn't know. Claire and Rob (see previous post) met Brady and his girlfriend Leasa at a cookery course in Vietnam. And it's that chance meeting which saw the hat wing its way to Hong Kong - the former UK territory which is now a special administrative region of the People's Republic of China.

I've asked Brady to see if he can find a way of continuing this great success story. But I can go to sleep tonight with a smile on my face. Because I've been wished happy birthday by a complete stranger on the other side of the world. And that's what the whole P40B phenomenon is all about.