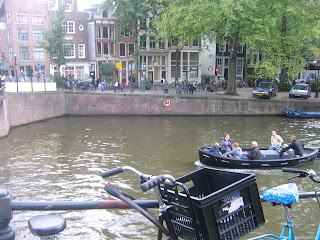 I sneaked into Amsterdam at the weekend and left an unexpected gift for one of the city's many cyclists. Yep, you guessed it - a brand, spanking new P40B titfer. Will the recipient follow the carefully worded instructions that accompany the hat? Or have they already chucked it in the canal? Only time will tell. See below for more photos.

Posted by Phil Woodford at 10:17 No comments: 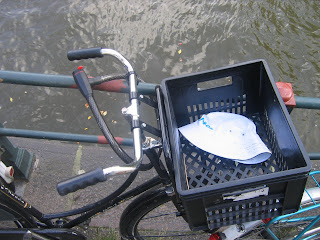 Hat's a big surprise: titfer turns up in the panier of an unsuspecting Amsterdam cyclist. Instructions are stuck on the exterior and interior of the hoed.

Posted by Phil Woodford at 10:14 No comments: 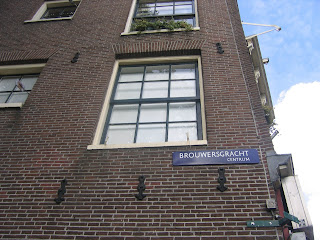 A titfer tip-off. Street sign gives a clue as to the location of the wild hat.

Posted by Phil Woodford at 10:12 No comments: 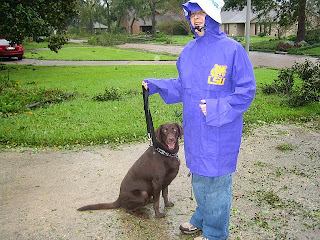 What do you do in the aftermath of a hurricane? If your name is Sue and you live in Baton Rouge, Louisiana, the answer is that you pick yourself and take your dog Milo for a walk. Wearing eye-catching P40B headgear, of course.

The intrepid pair are pictured not long after the arrival of Hurricane Gustav. And while I can't promise that my lucky titfer 13 will offer protection against falling debris, it does provide an opportunity to show off the true American spirit.

Back home now for some crawfish pie, I think.

The Demohatic National Convention? Yes we can! 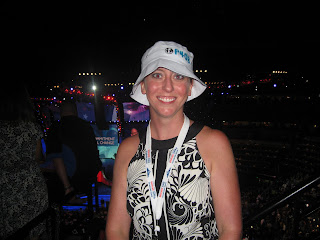 Can we get a P40B hat inside a major international political event? In the words of aspiring US Presidential candidate Barack Obama, "Yes we can!" The evidence above comes from the Democratic National Convention last month, held in Denver, Colorado. And the lady posing is Ginny - someone born and raised in a political family down in Louisiana.

As a strictly non-partisan birthday brand, P40B can't afford to take sides in the ongoing electoral battle in America. But if Maverick McCain and his moose-munching sidekick make it to the White House, God help us all.

So thanks for taking the trouble to take the photo, Ginny. And for reminding us that there's more than one important date coming up in early November. 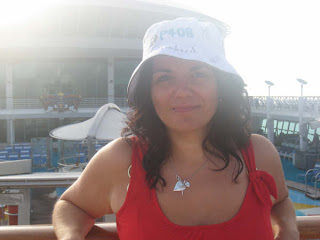 Location: Somewhere off the Amalfi coast
Date: 19 Sept 08
Hat No: 5
Status: Semi Wild
Posted by Phil Woodford at 00:35 No comments: 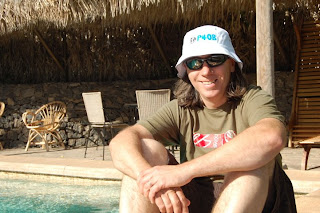 Up in front of the beak 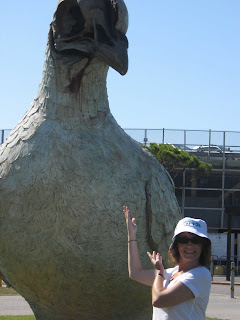 My old friend Ruth had better watch out. This seemingly harmless Italian sculpture at Pisa Airport appears to have his eye on her P40B titfer. No point in negotiating politely, as the bird only speaks pidgin English.

Ruth and her family have been on a tour of Italy and - like all respectable tourists - they packed some branded headgear. To find out more about their exploits and to see a P40B hat at the grave of one of the world's most famous astronomers, simply visit the Italiano Titfa Tour.

You thought the top of the CN Tower in Toronto was high? Try a cruising altitude of 33,000 feet. As pilot Aran guides his Airbus 330 over the Middle East, the pressure in the cabin is mounting. The excited crew give the signal and the official airline titfer is traded in for a stylish white P40B model. But the fun can't last long. Flying a plane is a serious business and there are customers waiting for duty free.

Aran picked up the hat in Cambodia and there's no telling where the 23 will end up next. It's one wild titfer and no mistake.

Number 11 on the streets of San Francisco 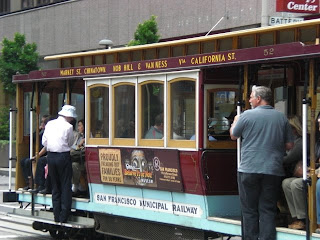 All aboard, now! The number 11 has come to town.

I don't know. You wait half an hour for a hat and then a whole load turn up at once.

This is my old friend Andy, who was born and raised in London, but now lives in NYC. He seems to be doing some kind of all-American tour, as he's sent me shots from Chicago and Kentucky and goodness knows where else. But it's these ones in Frisco that have particularly taken my fancy. Andy is riding the rails - at great personal risk - to get that perfect P40B shot. He seems to be very well dressed for the occasion and I'm not just referring to his branded headgear received on mail order from England. It looks as if he's actually donned a formal business suit, which shows a level of commitment and seriousness that is lacking in many of the other photos I've been sent. But then Andy does have an MBA from a top US business school and has held a number of high-powered consultancy jobs. This is probably him in dress down mode.

Great work. And we're promised further news from number 11 as it travels back to the north-east of the States.

Posted by Phil Woodford at 15:31 No comments: 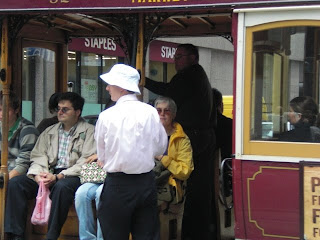 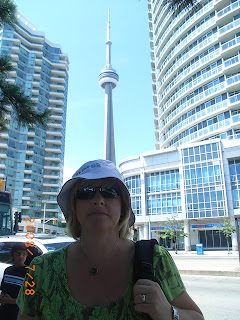 There's a story behind every titfer, but this one's a particularly tricky customer. It might be hat number 16. But then again, it might not.

The reason for the doubt is all to do with its days under controlled release in London. Without going into all the sordid details, I sent a hat to my friend Louise who hangs out on the Purley Way in Croydon. The great British postal service being what it is, the branded headgear never arrived. So I sent a replacement. And then, guess what? Yup, that's right. The original one turned up. So Louise had TWO titfers. She sent one travelling towards Australia via the Sound of Music stage show in London. And the other one was sent to Toronto with her friend Jackie. She poses here in front of the mighty tall CN Tower and then takes her hat for a ride in the elevator (see below).

Let's not get too hung up over numbers. The important thing is that we've conquered Canada. The rest of the world must surely follow.
Posted by Phil Woodford at 15:11 No comments: 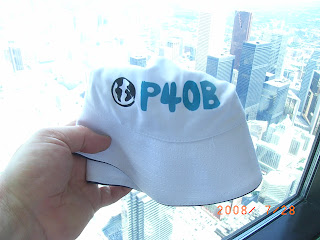 Jackie and the Great Glass Elevator: a P40B titfer soars to the top of Toronto's CN Tower.