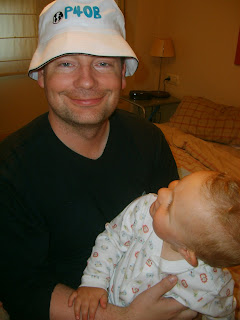 This is Richie Dowling - an old friend from 90s London - who now hangs out in the land of sangria, bull fighting and highly successful national football squads. He and his son Samuel are fascinated by the P40B phenomenon and were quick to step in with a photo.

But how can we be sure that "la titfa" is actually in Spain? Well, the clues are all there in the picture. Richie sports the designer stubble beloved of the Galicia locals. The bed or couch in the background looks distinctly continental. And the mosquito net at the window is a sure sign we're in a part of the world troubled by the effects of global warming.