P40B goes back to the roots of civilisation 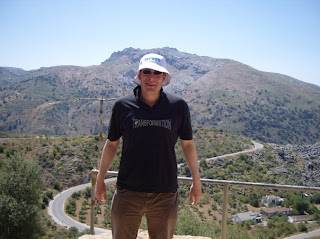 As some readers may know, this birthday of mine is going to be celebrated in various timeframes. My steampunk blog, for instance, places P40B in 1888. Things were so much simpler in those days, weren't they?

Birthday fan Marcus has decided to go even further back in time. Right to the cradle of modern civilisation, in fact. He tells me that this shot is taken at Cueva de la Pileta, near Benaojan in southern Spain, which is known in the local lingo as a "yacimiento arqueológico". Apparently it's the first place in Europe where homo sapiens put in an appearance. And without that seminal event, there would be no internet and no P40B. And probably no Starbucks or ITV1 either.

Previously on the P40B tour, this titfer paid a visit to the Alhambra - a significant piece of Moorish architecture and major tourist attraction, south of Granada. It was also on display during the battle of wills between Rafael Nadal and Roger Federer at Wimbledon.

With such an illustrious history attached to it, the eight hat has a lot to live up to. Perhaps that's why it's popped itself on a plane to Shanghai. We look forward to hearing from it again before the Olympics get under way.