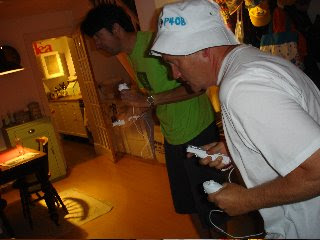 Although I know for a fact that two hats - 8 and 23 - have made their way to China, I haven't yet seen any evidence of the P40B brand at the Olympic Games. And that's despite hours of zooming and freeze-framing over the weekend.

The good news is that hat 26 has been involved in an equally momentous event in Brighton, England: the first ever Wii Olympics to be held in the UK's favourite south coast resort. The Wii is a more advanced version of the Atari 2600 and allows people to travel to Beijing in virtual reality, participating alongside the athletes in real time. In the snap above, we see Tim beating Michael Phelps in the 400m individual medley swimming event.

When the Wii was invented, its makers never nintended it to be used in conjunction with contemporary headgear. But the P40B titfer is highly streamlined and aerodynamic, making it the only hat to be have been approved by the US Birthday Sport Promotions Agency.